Anyone can improve their knowledge of anatomy and predicting movement and prove it. I wrote this article to help you start to learn useable moving anatomy.
Anyone who works with people in movement would benefit from seeing and predicting movement in real-time. After many courses and an MSc, I certainly didn’t feel like I had a good grasp of useable anatomy.  I could pass a quiz though so bring me a multiple-choice questionnaire to train, and I would be magic.
In 2006 after wrestling with another expensive course, I decided to throw my Dad’s accountancy brain at the problem of being able to remember and predict movement.  The result was a skeleton spreadsheet, and I called it the HMAC (Holistic Movement Assessment Chart).
The innovative part of the chart is that it gets you to learn content in a map style, learning routes which is a system that memory champions have been using for years.
In my course, I get you to play along by drawing with me, moving on instruction and finally predicting motions in order at every joint as they occur.
Learn the bones and joints.
1 – find a skeleton in a funny position (use www.pixabay.com )
2 – using a book to help you, draw all of the bones and label each one
3 – employing the same order that you composed the drawing of the skeleton, go back and name the joints
4 – repeat the above, in the same order but from memory
5 – fill in the missing bones and correct mistakes using an anatomy book
If you keep repeating those five steps, you will eventually know all of the bones by putting yourself into that position.
MORE TIPS
If your drawings are terrible, then you tend to remember them even more.
If you write the words in different colours and consistently do that, you will have another reason to remember them.
Making up similar but silly/memorable names for the bones will give you more of an emotional attachment to them which helps with memory
Name your skeleton, give them hair, maybe a back story or build an entire story to help you remember the bones too
Here is an image from Pixabay 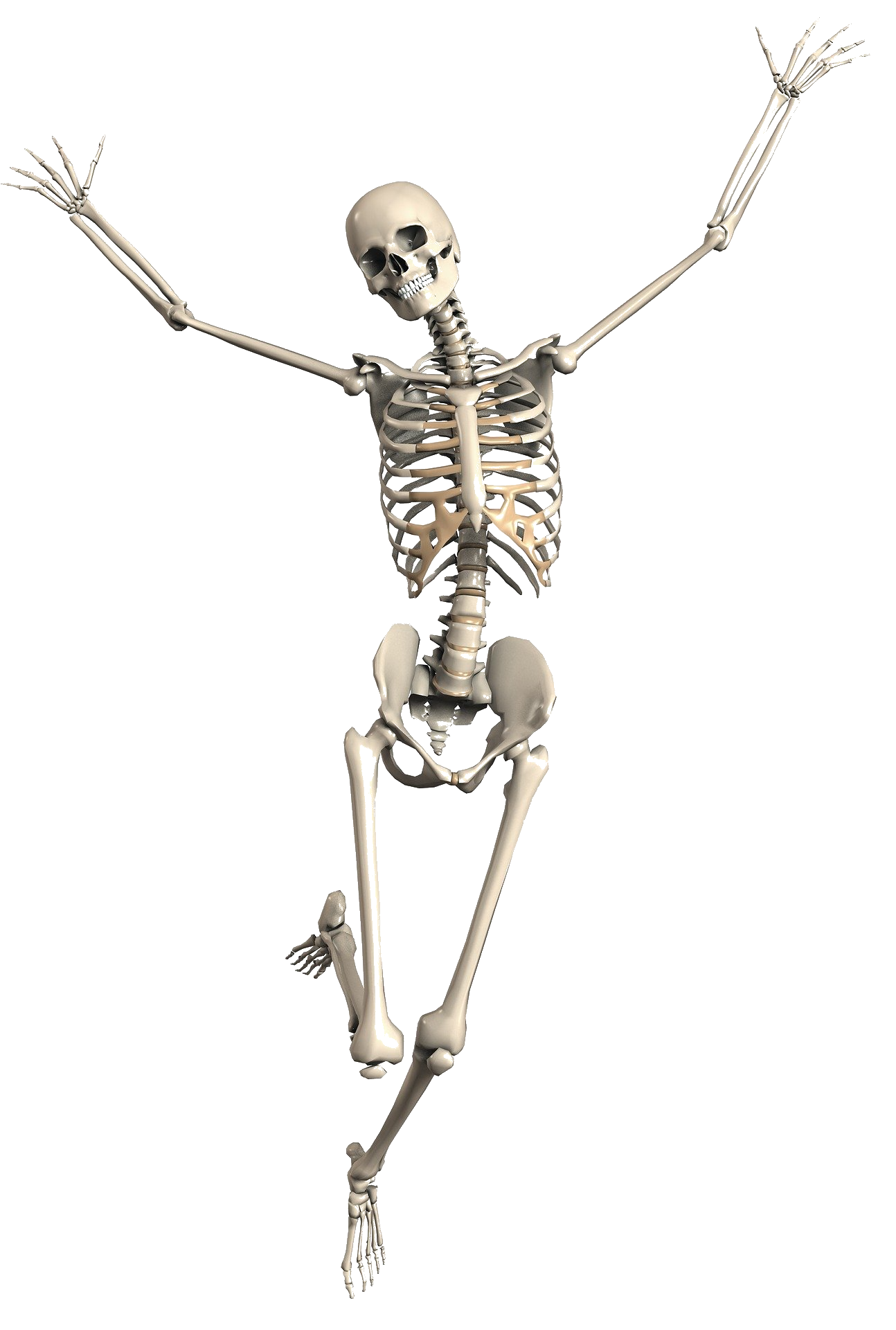 Here is my drawing 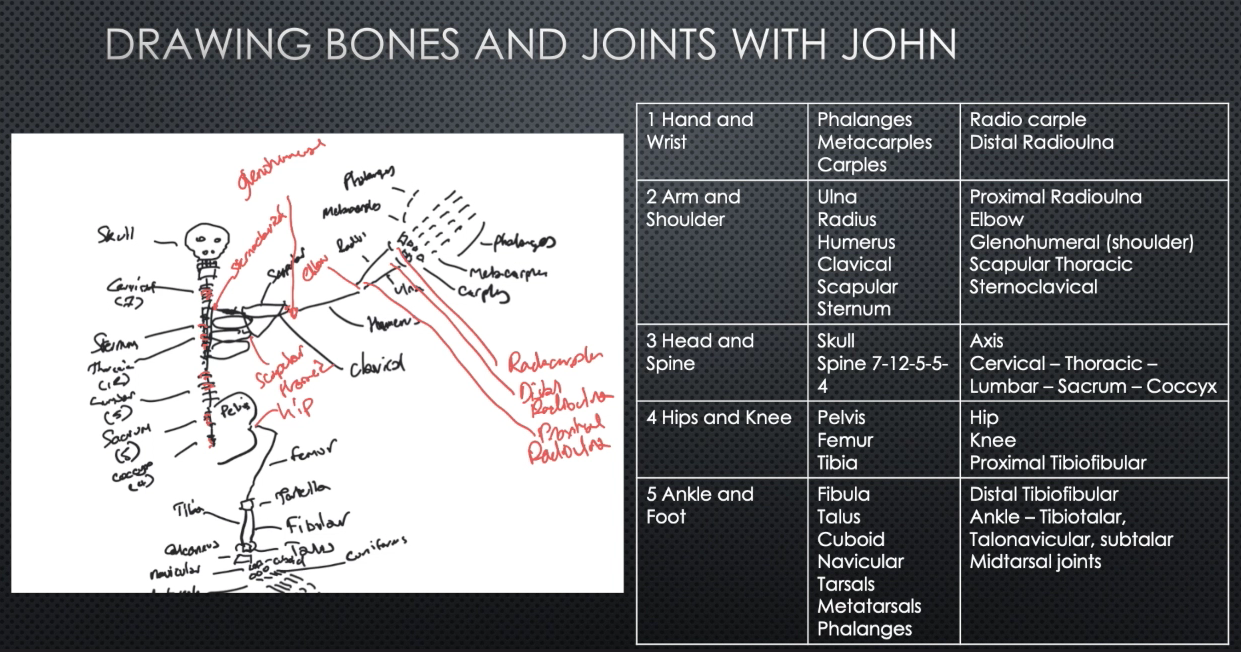 Terry the one sided skeleton, reached out with the tip of his phalanges, which pulled on his metacarples and carples, which were already sore from boxing. He wasn't stiff though, he still had some good movement in his radio carple and distal radioulna joints, those things had the age of a 20 year old, not the 300 years that Terry had lived on this planet.

His radius and ulna were pretty decent really, holding strong at the proximal radioulna joint and since the strength his got, ironically through tennis, his elbow was also sturdy.

Slightly bent and fairly short, he did not find his humerus funny at all, in fact sometimes it would really irritate him when it got stiff and could not move around the glenohumeral joint. I think if he had laughed then that would have moved his scapular and clavicle up and down, probably giving him some more mobility.

To make sure he could reach, he needed all the support he could get from his core, or the ribs, sternum and spine area. Shaking his skull above his axis, he suddenly remembered the phone number for his spine, 7-12-5-5-4, he knew calling this would get him through from his brain to his cervical, thoracic, lumbar, sacrum spine and of course his coccyx, where he could ask for more stability for protection, without upsetting his ribs or sternum, who would be upset because they like to protect things.

The strength in the core would not be possible without the pelvis being a centre for the whole movement, and this relied heavily on the deep ball and socket joint of the hip, where the femur sits just perfectly.  The femur is a sturdy bone of the lower body and that is lucky, because the patella is often upset at being mislabelled the knee and the tibia and fibular are sat on structure that when everted is soft and giving like quick sand, yet when you push back on it, and force it to invert, it just gets rigid and doesn't give at all.

Tibia and fibular are cool, fibular takes on no weight and just sits proximally and distally with Tibia, not minding when Tibia forms the knee with femur.
The tibia and fibular have embraced the temperament of the foot and ankle though, and they cuddle the talus, which then diplomatically moves and reacts to the calcaneus, this tibiofibular, tibiotalar, talonavicular and subtalar gang of joints, really do then command the cuboid, navicular, tarsals, metatarsals and phalanges to either stand rigid or relax and give.

From the outside looking in, you would probably see this happen most from the midtarsal joint.

Anyway, this is all to say that Terry really does use all his joints and bones to get to the milk on the top shelf, of the Ghost Pirate Ship! (insert your own evil laugh here)
Notice: This Section needs manual review!
We advise you to create an empty section, copy the content to the new section and delete this one otherwise the functionality of the new pages builder in this section is not guaranteed. 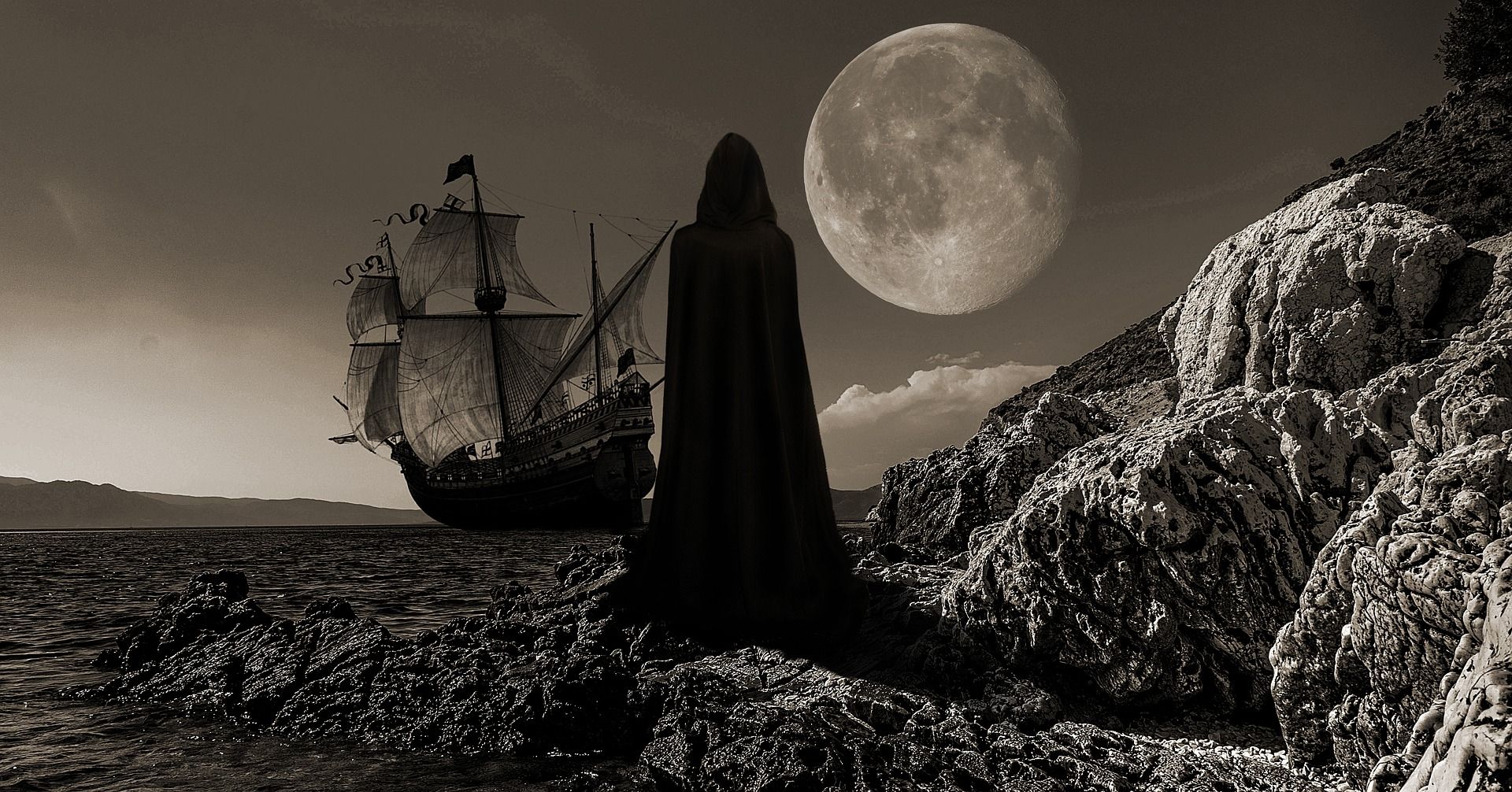 Terry looking fondly at the ghost ship, happy now he has his  milk, about to be upset when he realises he is now Vegan.
If you would like to learn anatomy, bones, joints, muscles, and how they move, you should look at the following course.  It is delivered week by week and starts as soon as you sign up, you get access to a WhatsApp group and the FASTER social site (inside our e-learning website).  The course teaches the content using eBooks and videos, with a quiz and a certificate for each module.
Notice: This Section needs manual review!
We advise you to create an empty section, copy the content to the new section and delete this one otherwise the functionality of the new pages builder in this section is not guaranteed.

The first and the best online Anatomy Course for people who want knowledge they can apply.